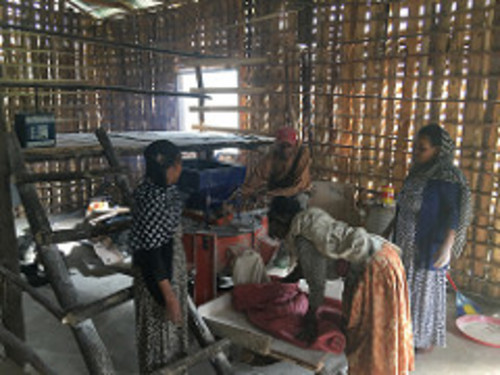 A damning insight into gender equality sees no recent progression in the UK's efforts to close the gender gap. According to the 2017 Gender Equality Index, despite ranking highly, compared with other European countries, the UK hasn't actually improved in the last decade.

It is unthinkable that one of the poorest continents in the world could have some lessons that the UK would do well to learn. Yet, whilst Africa is far behind the UK and Europe in terms of the way women are treated, the winds of change are blowing there. The Africa Human Development Report 2016 shows that gender equality is recognised to be an issue, and, encouragingly, that an agenda for action has been proposed. Given the shockingly poor starting point, it will take a long time for women in Africa to enjoy the same treatment as those closer to home, but it is encouraging that any action at all is taking place on a continent where the most basic human rights for either sex have long been a very low priority.

One of the flagships for narrowing the gender gap is an innovation by UK company BluPoint, which is rolling out a platform which facilitates change from the bottom up, by bringing modern technology within the reach of some of the poorest and most remote communities in Sub-Saharan Africa - communities where women have often had little or no previous opportunity to benefit from even the most basic education. BluPoint believes that enabling people to access knowledge will in turn drive innovation and create change. This creates the first steps towards improving the lives of African women, who have long been the backbone of their communities – raising their families, working the land, and creating small businesses – yet when they raise their voices to a level where they can be heard, gender inequality often raises its ugly head.

Eunice Baguma Ball, the Ugandan Founder and Executive Director of the Africa Technology Business Network (ATBN), commented: “We have established that there is a gender gap where the adoption of technology is concerned and this is top of the agenda for a lot of African nations. Enabling digital technology and innovation helps to create a more sustainable economy, and creates a big shift in the way people engage and develop. Progress is made where change happens from the ground up, so providing access to knowledge will enable local innovation for local change. BluPoint, by delivering content to remote communities, is enabling us to to place this knowledge within the grasp of women who are driving change in their communities.”

BluPoint gives communities access to offline digital materials, and fosters change by allowing women to prove that they are just as worthy of respect. In communities where BluPoint is available, women are wholeheartedly embracing opportunities to educate themselves, to learn new skills, and to share the knowledge that they have acquired.

A report by the GSMA “Bridging the gender gap: Mobile access and usage in low- and middle- income countries” shows that there is a significant technology gap, with women reported to be 23% less likely to own a mobile device. There are a number of reasons for this, with cost being a major factor, due to the lack of financial independence enjoyed by women in Sub-Saharan Africa. Another limiting factor is confidence in using technology, and lack of opportunity to become familiar with it. BluPoint aims to change this, by creating fundamental infrastructure which makes access to knowledge easy, and in turn, helps to develop technical literacy/confidence. Its targeted content can be accessed via WiFi, Bluetooth or even FM radio, bringing information within the reach of everyone, even in areas where there is no power or network signal. In places where people may have to walk for days to find healthcare, education, or simply to communicate with neighbouring communities, the ability to instantly access local information is a huge step forward. BluPoint's platform provides on-tap local information, and shares local knowledge, as well as being a hub for information from further afield that until now, has not been readily available.

To continue to meet growing demand for the platform, BluPoint is seeking to build partnerships with businesses and individuals to facilitate ongoing development, to successfully implement pipeline projects, and to strengthen the BluPoint team across several key areas of the business. In line with it's “small acorns” ethos, BluPoint is not solely looking to connect with large global businesses, but rather, seeks to build relationships with everyone who sees the value in what they are doing, and wishes to be part of the journey.

To find out more please visit http://www.blupoint.org for more information.