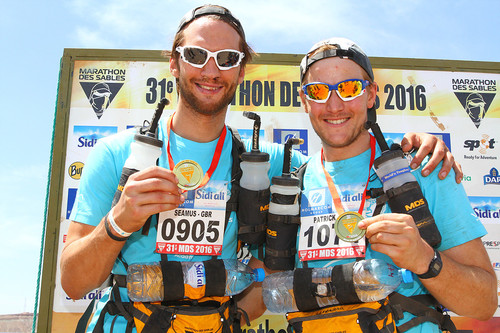 University pals Seamus Crawford and Paddy Montgomery have less than 24 hours to go (weather permitting) before they set off from San Sebastian in the Canaries on their record-breaking attempt to become the first pair to complete 3 of the world’s toughest extreme challenges – a 2933 mile bike race across Europe, the legendary Marathon Des Sables across the Sahara and now the Talisker Whisky 3000 mile Atlantic row. No one has done it before and Paddy and Seamus are doing it in 3 consecutive years!

Paddy, the son of Bruce Montgomery, a retired consultant urological surgeon at Frimley Park Hospital, is raising money for the Prostate Project, a volunteer led, Guildford based prostate cancer charity and Seamus is rowing for Shooting Star Chase, a children’s hospice charity, also in Guildford, caring for babies, children and young people with life-limiting illnesses.

All the training is done, all the planning complete. Now it’s just the daunting task ahead - 40 to 60 days of solid rowing - 2 hours on, 2 hours off without a break until they row into Nelson’s Harbour in Antigua, hopefully around the 25th January. Their boat is just 7 metres long and a little under 2 meters wide with only a small cabin for protection. They will face a constant battle with sleep deprivation, salt sores and physical and mental extremes that will test them to the limit.

Messages of support and donations to their causes will give them a huge boost when they are alone in the middle of the Atlantic. Paddy’s target for the Prostate Project is £300,000. The money will go towards the charity’s Race to the Line appeal to raise £2.1m towards the building of a new world-class urology Centre at Royal Surrey County Hospital in Guildford. Follow their progress at either: www.saddlesandsea.com
or: www.taliskerwhiskyatlanticchallenge.com and to make a donation go to http://uk.virginmoneygiving.com/Team/SaddleSandSea

The Prostate Project has no offices or paid staff. Admin costs are less than 5% resulting in at least 95% of raised funds going directly to the point of need. The charity has raised more than £8m over the last 19 years. More information is available at: www.prostate-project.org.uk