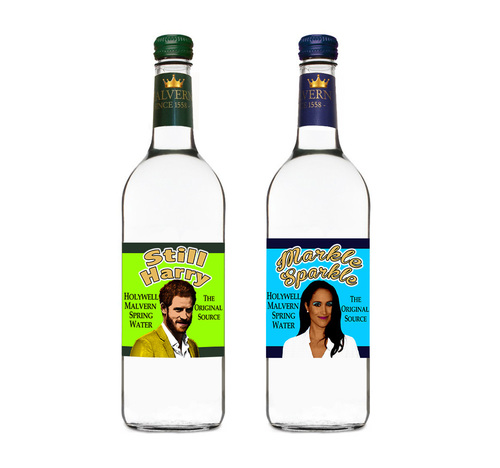 Limited Edition Markle Sparkle sparkling water and Still Harry, which is non-sparkling but still exciting in its own way

Malvern is renowned for being the purest mineral water there is and that’s why, for five centuries, Royals have made it their drink of choice.

With the nation preparing to celebrate the latest Royal Wedding, Holywell Spring Water, who bottle water in Malvern, are offering an alternative to the usual bubbly.

It comes in the bottle shape of Limited Edition Markle Sparkle sparkling water and Still Harry, which is non-sparkling but still exciting in its own way.

The bottles will only be available in the week prior to the wedding in May. Commenting on the wedding water, Simon Smith on behalf of Visit The Malverns, said:

“Malvern grew up around its water and the Victorian water cure. We have over 150 wells throughout the area that people can visit and a great local business supplying Malvern Spring Water. With nine places called Malvern in the USA, we think this Anglo-American union deserves a celebratory special version of The Malverns finest bottled water.”

Malvern water’s royal connection dates back to the 16th century when Queen Elizabeth I is said to have drunk it in public. It was first offered for sale at the Great Exhibition in 1851 and Queen Victoria refused to travel without it.
Princess Mary of Adelaide and King George V both gave it a royal warrant while our current monarch, Queen Elizabeth II, is also reported to have taken it travelling with her.