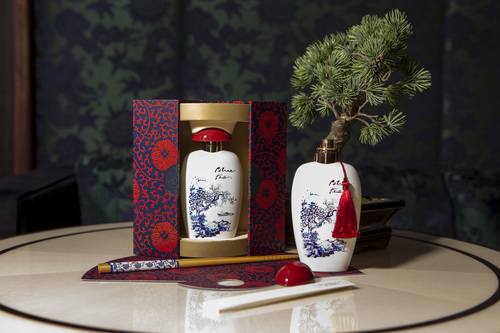 Luxury fragrance house The Merchant of Venice launches their latest scent based on an exclusive and raw material: BLUE TEA.

The Merchant of Venice continues its journey in the Far East with the launch of a fragrance inspired by the aromas and precious materials of Asian lands: Blue Tea.

The magical and enchanting story of Blue Tea stems from Marco Polo’s extensive travels to China in 1265, to meet with the legendary Mongol emperor, Kublai Khan. Following the emperor’s instructions, Marco Polo and his men returned to Venice in 1269 with a message for the Pope. In 1271, they set off again to China to take the Pope’s reply back to Kublai Khan. Their journey took them three and a half years along the fabled Silk Road, an ancient network of trade routes that connected the East and West.

Having established himself within the court of Kublai Khan, Marco Polo became much favoured by the emperor and served as his special envoy, providing useful reports and accurate observations of daily life from his travels around Asia, including three years serving as the Governor of Yangchow.

Today, following in the footsteps of Marco Polo, the fragrant aroma of a blue-tea infusion brings alive these incredible tales of distant lands. The delicate and mysteriously romantic blue petals of the butterfly pea flower, commonly found in South East Asia and used for the brewing of blue tea,
have endured through the centuries.

To date, the Blue Tea flower has never been used before in a fragrance, but after hundreds of combinations and elaborations, this elegant fragrance has been masterfully bottled by The Merchant of Venice through the alchemy of perfumery.

The Blue Tea bottle itself has a signature silhouette: white with a blue Chinoiserie design. The white recalls Chinese white glass, which is similar in appearance to porcelain. This blow mold system was invented in Murano around the 15th century to imitate the first Chinese porcelain objects that came to Europe, where the secret of its manufacture was still unknown.

Marco Vidal, founder of The Merchant of Venice, explains: “Our quest at The Merchant of Venice is to identify the aromas and fragrances which capture the spirit of distant travels and stories from the Orient. With Blue Tea, we have found another ancient and noble ingredient, which is in tune with the notes of our perfumes. Fine, fragile and yet à point, with an elegance and allure which will become a model of its kind.”

BLUE TEA - PRODUCT NOTES:
Exploring the richness of regenerating tea, the fragrance evolves around a poetic accord of blue tea and floral bouquet of rose, magnolia and neroli.
Heart blooms on contact with these various facets, suave, fresh and sometimes slightly fruity.
Base notes of textured vetiver rounded by musks support the rural and stimulating touch of green.

BLUE TEA - EDITORS' NOTES:
• The Merchant Of Venice was launched in the UK market in 2013 with high-end department store distribution with the likes of Harrods, Harvey Nichols and House Of Fraser.
• The Merchant of Venice has ten stand-alone boutiques in Italy.
• The stores in Milan and Rome are designed by Pier Luigi Pizzi; an internationally renowned set designer who has worked in the most prestigious theatres in the world, including the Gran Teatro La Fenice of Venice, and the Teatro Alla Scala in Milan.
• The Merchant of Venice has a line of Home Accessories, featuring contemporary Murano glass lanterns and vases designed by renowned glass factory NasonMoretti. This interiors line includes refined scented candles, home sprays and room diffusers.
• The Merchant of Venice has also created a luxury hôtellerie range of personalised amenities and services for high-end hotels, which launched at the Cipriani, as well as other luxury resorts.
• In June 2017, the brand inaugurated the first The Merchant of Venice SPA inside the Hotel Kempinski Palace, a 5-star luxury hotel on the island of San Clemente in Venice. The Spa offers exclusive sensory experiences using rare and precious perfumed oils. Each treatment guides the body and mind on a unique journey to discover the art of Venetian perfumery, alongside signature gold-mask facial treatments created in association with Venetian gold-beating laboratory Battiloro.