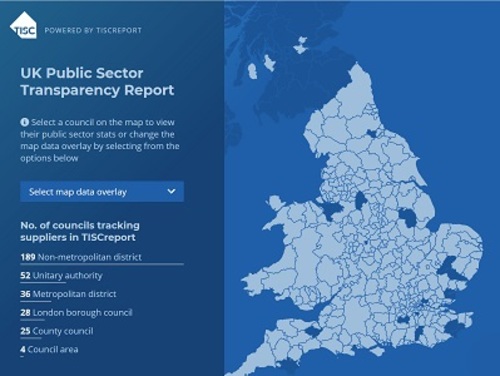 See who is most effectively driving out modern slavery and exploitation from their supply chains through a live transparency map that collates real-time information for the UK's Cities, Councils, Districts and Boroughs.

A year ago the CEO of the Transparency in Supply Chains Register* TISCreport.org, Jaya Chakrabarti MBE presented the state of compliance with section 54 of the UK Modern Slavery Act in Westminster to Parliamentarians and key industry leaders (only half jokingly subtitled “50 Shades of Compliance”). It was fair to say that, bar a handful of exemplars, the level and quality of compliance was as variable as it was poor.

A lot has changed in twelve months however. There is now a review of the Modern Slavery Act with a focus on the Section 54 transparency clause[1]. Most recently at the UN General Assembly (UNGA), Prime Minister May has called for action from the international community, endorsed by 77 states. Whilst the UK, US, Canada, New Zealand and Australia have committed to eradicating modern slavery from global supply chains[2]. This, which has followed the UN Sustainable Goal 8.7 [3] shows a powerful global movement dedicated to ending the trade of human lives for profit. But how are these initiatives manifesting in real actions on the ground?

To answer that question TISCreport has published a live Transparency Map to showcase the potential power that has until recently lain dormant within the UK’s local government procurement budgets. Members of the public can now see how their cities, counties, districts and boroughs are using the buying leverage afforded by public funds to drive modern slavery and labour exploitation out of their supply chains.

Says Stuart Gallemore, CTO of TISCreport, “As you can see from interrogating the infographic, there are just under 200k live supplier relationships being monitored from the UK’s local government bodies alone, with significantly more private sector suppliers globally. By making this data transparent for UK cities to use, we are already changing behaviours. It’s important to note that labour exploitation and modern slavery are in every supply chain. Proactive cities are using live transparency data to tackle these issues. If your city is on the map you should be very proud. If you don’t see your city, it doesn’t mean it is not doing anything about modern slavery, but simply not focussing on this particular open data approach to supply chain transparency. Obviously we hope your city will collaborate in the future!”

Jaya, a self-confessed “open data geek girl”, controversially says: “The days of tickbox compliance are numbered. Transparency data is everywhere if you know where to look and what to query. It’s live, rapidly changing and shows patterns that are otherwise hidden by companies with clever accountants. When we first started, we quickly realised that suppliers form the biome of the large companies using them. It is commonly known that those companies offload much of their financial risk onto those hidden suppliers as a matter of standard business practice, but they also leave indelible non-financial markers. At TISCreport we view every single organisation in their ‘biomes’ as a source of those markers.”

Anyone can see how their city is faring on public sector supply chain transparency by clicking on their city on https://tiscreport.org/public-sector/uk-transparency-report/. Rather than being a static snapshot, many other live transparency data sets will be added to this map, making it the best available picture of transparency of cities in the UK, using unique data sets that are not held anywhere else.

At this point in time the most transparency data is available for Wales and England, with the beginnings of visibility in Scotland.

The Welsh Government’s success has its foundations in their Ethical Employment in Supply Chains Code of Practice, which is also administered online on TISCreport.

In England, engagement has been accelerated through regional campaigns and more recently, the Coop Party Anti-Slavery Charter.

In Northern Ireland, it is their Department of Justice that is leading the anti-slavery work and their spokesperson has provided TISCreport with an update:

“Tackling modern slavery is a priority for the Northern Ireland Department of Justice, which is currently consulting on a new multi-agency draft Modern Slavery Strategy for Northern Ireland[4]. The ‘Prevent’ strand of the draft strategy seeks to reduce the threat of modern slavery by reducing vulnerability and demand by raising awareness and by ensuring that key sectors and the general public are equipped to spot the signs of exploitation and report any suspicions. It also seeks to strengthen cross-sector resilience through adopting a more strategic approach to training by conducting a training needs analysis and by developing and delivering a training plan for relevant sectors. The draft strategy also commits to increasing engagement with relevant sectors to raise awareness of risk and promote good practice and as part of this commitment, the Department of Justice plans to host a training event for all public sector procurement leads, to promote best practice in ensuring that supply chains and public procurement are free from modern slavery. This event will take place in January 2019 and will be delivered by Welsh Government officials, who are recognised as having led the field in this area, having successfully delivered this training across their jurisdiction.”


INFORMATION 2 - Why Cities Will Save the World

Some may wonder why there is a focus on cities. Jaya explains, "The UK Modern Slavery Act has paved the way for doing some very exciting things globally. But cities are able to react and make decisions more quickly than Governments. Following Bristol City’s call to action and Welsh Government’s pledge to end labour exploitation in its supply chains through its Ethical Employment Code of Practice, hundreds of UK city administrations have joined them. The City Transparency Map we’ve produced benchmarks what UK cities are doing with their public buying leverage, just in time for the Global Parliament of Mayors Summit that is being held in Bristol this month. Add in Anti-Slavery Week and the timing is perfect for a storm of transparency activity. We’re all very excited, and we’re only just getting started!"

"The power of City Leadership is evidenced in this single map. Back in 2015, Bristol was the first city to commit to Supply Chain Transparency on TISCreport, after a small social enterprise with a global vision asked an important question.

“Later this month Bristol will be hosting both the Global Parliament of Mayors annual summit and the first meeting of the UK’s Core Cities and combined authority leaders to discuss how we can work together to tackle shared challenges. We know that cities need to collaborate and lead the way if we are going to be able to create the change that we want to see in our society. By committing to this initiative we have shown that we believe in the importance of transparency and I look forward to seeing this become a global movement.”

Interestingly, Jaya was the chair of the campaign that enabled her beloved city of Bristol to elect its first Directly Elected Mayor back in 2012. When asked if this was coincidental she replied “No! I have always believed that an empowered city leadership will play a significant role in saving the world from its economic, environmental and human rights problems. Our global governments have their hands full with some very seriously destabilising situations right now. It is no surprise to me that global cities and companies are stepping up to the plate to tackle the injustices that are causing these global issues. We’re so very proud to be a part of that story!”

Whilst this is the very first iteration of the map, the potential is already starting to emerge.

As Welsh local authorities have shown, the more suppliers that are transparently shared, the more that can be determined from the data about those suppliers and other buyers. This in turn will help make better buying decisions.

Local authorities have raised the bar for their suppliers, showing how transparency can lead to effective actions to protect vulnerable workers beyond a tendering process. Many are starting to invite their suppliers to share their own tier 1s which increases the power of transparency exponentially. However this becomes even more powerful if the data is about live supplier relationships rather than historical.
Having a statement doesn’t always mean a supplier is compliant

Standard procurement guidelines enable buyers to ask for information to be uploaded. But buyers no longer need to settle for receiving a boilerplate compliance document when compliance can be checked live. Once this message is received, the quality of compliance will increase.

Collaboration combined with automation (machine learning, AI) will make this much easier. The technology already exists for this to happen. Earlier this year Elizabeth Denham, UK Information Commissioner, spoke of Trust, Transparency and just-in-time Freedom of Information (FOI) [5]. TISCreport believes that Just-in-Time Transparency will interlock to provide the best outcomes for vulnerable workers.

[3] UN Sustainable Goal 8.7: “Take immediate and effective measures to eradicate forced labour, end modern slavery and human trafficking and secure the prohibition and elimination of the worst forms of child labour, including recruitment and use of child soldiers, and by 2025 end child labour in all its forms“

[4] The public consultation on the draft modern slavery strategy can be accessed at https://www.justice-ni.gov.uk/sites/default/files/consultati...

In accordance with section 54 of the UK Modern Slavery Act TISCreport tracks websites of all those companies and groups known by the system to be over £36M in turnover as well as recording voluntary compliance from organisations below the threshold. More critically, the system automatically alerts companies that are overdue that they need to take action as long as social media or email contact details are available.

The TISCreport dynamic dataset is continually being updated, and there are just under 1000 UK public bodies within the system. It is a certified open data provider, free to join, enabling an in-depth drill down of data against shared supply chains via a private, secure dashboard. Uniquely, beyond the UK, TISCreport interlocks intelligently with related global legislations focussing on supply chain transparency and tackling modern slavery/labour exploitation. More transparency data sets are in the pipeline which will enable cities, districts and boroughs to hone in on labour exploitation within their supply chains.

As a B-Corp[6] social enterprise, TISCreport funds itself through subscription fees from organisations able to afford the £200 annual subscription fee and and transparency data services. 50% of the subscription fee goes directly to anti-slavery charity Unseen, which runs the UK Anti-Slavery Helpline.