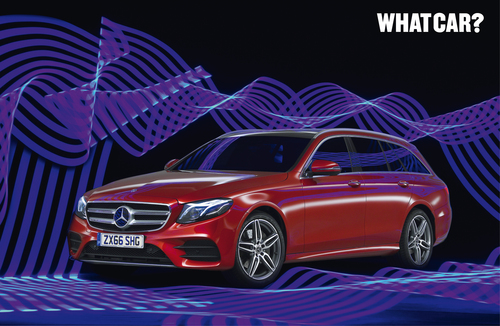 
The Mercedes E-Class Estate has claimed victory at the What Car? Used Car of the Year Awards 2019, triumphing over a host of the UK’s leading models.

The 2017 Mercedes E-Class Estate is based on the E-Class saloon launched in 2016. It won over the What Car? judges with its luxurious and spacious interior, immense comfort and remarkable value-for-money.

The E-Class Estate also overcame competition from the BMW 3 Series and Skoda Octavia to win top spot in the Used Estate Car of the Year category.

Mercedes proved its worth again in the Used Luxury Car of the Year category, with the S-Class coming ahead of the Porsche Panamera and BMW 5 Series.

Audi repeated its success from the 2018 awards, leading the way in three categories with the Audi A3, Audi Q7 and Audi TT winning the Used Family Car of the Year, Used Luxury SUV of the Year and Used Coupé of the Year respectively.

Audi’s victory in the Best Used Coupé and Used Luxury SUV sees the Q7 and TT taking their category top spots for the second consecutive year.

Mazda also saw similar success, with the CX-5 winning the Used Large SUV of the Year class for a second year running.

The 15 What Car? Used Car of the Year categories were divided into price points to better reflect the variety of cars available on the used car market. The final decision on winners was taken by a panel of experts, based on the main criteria of quality, reliability, value and the availability of desirable versions.

Alex Robbins, used cars editor at What Car? commented: “It isn't often that the winner of one of our overall awards comes from the estate category, but this year the Mercedes E-Class Estate proved impossible to resist.

“Up front there's a luxurious interior, an extremely comfortable ride, cosseting refinement no matter which engine you choose and impressive fuel economy for such a large car. But the E-Class Estate combines all this with a terrifically roomy tail end; the boot is simply vast, making it practical enough for almost anything you'd care to throw at it, whether that be a fully loaded family holiday, a new sofa, or all the bags of rubbish that result from that first household clear-out of the year.

“It's a master of all trades in its own right, in other words, but what really gives the E-Class the overall win here is that it combines this all-round excellence with terrific value on the used market.

“It is, in short, today's best-kept used car secret, and a worthy winner of our overall award.”

What Car? is a leading source of used car insights, regularly pitting used cars against each other in group tests to find out which is the best, as well as a used car twin-test in every issue. The full story on the Used Car of the Year Awards 2019 can be found in the latest issue of What Car? on sale on 5th October and online at https://www.whatcar.com/used-car-awards/

What Car? is committed to providing the very best used car advice that British motoring journalism has to offer and to covering used cars just as thoroughly as new cars. What Car?’s used car section includes reviews, long-term tests, group tests, classifieds, online valuations and a finance calculator to help buyers in the used market find the very best car for their needs and budget.

The Used Car Awards are a reflection of the vast and varied used car market, covering nearly new cars as well as older models that might have more relevance to buyers on a budget.

What Car? modelled its Used Car Awards on its long-standing Car of the Year Awards for new cars, which are widely acknowledged to be the most prestigious in the industry. In addition to holding special awards for the best used car website and best approved used car scheme, judging took place across 15 different classes of car, from city cars to luxury SUVs, via estates, coupes, green cars, and others.

What Car?’s Used Car of the Year award winners were categorised by three different price points in each class of car. This allowed the judges to work out which models really were the best value used buys – and which looked too expensive, given what they actually offered to the buyer.

Some cars fit into more than one price band, of course, with some appearing across two, or perhaps even all three, of them. In these instances, the What Car? judges selected the price group in which they felt the car was best served; either one in which it offered the best range of engines, benefitted from a facelift which brought new technology or extra equipment, or simply seemed like the best value of all. Cars aged five years or under were eligible for the awards.

Using this methodology, What Car? was able to order the vast array of prices and models available and could then judge each car on its own merits, as well as by comparison with its rivals. Once victors in each price band within a particular class were chosen, the three finalists were pitted against each other for the overall category award. The judgement was made as to which of the three cars then offered the best overall value taking into account their age, likely mileages and condition and availability, and whether the pricier cars were worth the extra cost for any extra technology and advances they offered – or whether the lower priced cars were good enough to overcome the fact that they might not be at the cutting edge.

The decision-making process took two days, during which the latest used values were ascertained from classifieds, and decisions drawn from What Car?'s extensive road testing experience. The expert panel debated the relative merits of hundreds of different models in order to work out which was the best in each class.

In judging used cars, What Car? examined the quality of cars available for a certain cost; as used cars are limited in number, rather than available to order, a car's ubiquity was also factored in. If there are more examples around, the chances of finding a good one locally are greater, so ubiquity is a positive characteristic in a used car.

What Car? also examined the availability of good examples of a specific model. If there were vast numbers of a particular car around at a good price, but they were all undesirable high-mileage, low-spec models, What Car? looked at the cost of more appealing versions. These picks of the range will have comprehensive specifications with an average mileage for the year and a full service history. If a car was still competitively priced on this basis, only then was it deemed to be good value.

A heavy emphasis was placed on a car's reliability in the judging process, which is based on What Car?’s own Reliability Survey, the latest results of which can be found at https://www.whatcar.com/news/2018-what-car-reliability-surve...

What Car?, the UK’s leading and most trusted car buying brand, has the magazine, a market-leading website and several established brand extensions. It has helped Britain’s car buyers to make purchasing decisions for more than 40 years and its tests are widely regarded as the most trusted source of new car advice.