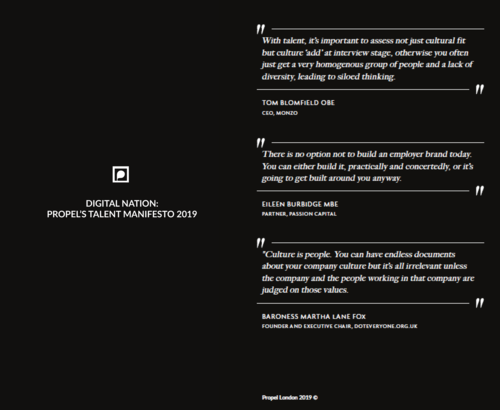 
LONDON: 30 January 2019 – Company culture is so critical to success in the digital economy that it needs to be built even pre-product, with board meetings dedicated to a company’s culture rather than its financial numbers, according to Digital Nation, a report into work and working culture.

The report provides qualitative and quantitative evidence that company culture is today the single most important factor behind success in an economy suffering a desperate dearth of talent.

Some key findings include:

Alex Depledge MBE, founder of cleaning marketplace Hassle.com, which she sold for £20m before setting up online architectural design business Reis, said: “You’re in a global competition for talent and culture is so critical that your board meetings shouldn’t be about your financial numbers but about constantly revisiting your culture.”

Commenting on the importance of company culture and values, Baronness Martha Lane Fox founder of doteveryone.org.uk, says: “Culture is people. You can have endless documents about your company culture but it’s all irrelevant unless the company and the people working in that company are judged on those values.”

Lane Fox pointed out that the job of company leader was to drive company culture, making it very worrying that the Digital Nation survey found a third of respondents believed their leader didn’t demonstrate behavior that underpinned their company values.

Talking about hiring the right people, Monzo CEO, Tom Blomfield OBE says: “With talent, it is important to assess not just cultural fit but culture ‘add’ at interview stage, otherwise you often just get a very homogenous group of people and a lack of diversity leading to siloed
group thinking.”

“The war for talent has never been fiercer, the rewards for those that can attract the best never higher – and it’s clear that company culture is one the most important factors behind creating a truly world-beating company...” Says Melina Jacovou, Founder and CEO Propel London.

• 52% are considering a job change within the next 12 months up from 49% in 2017/18
• The primary reason that individuals give to leave jobs is the people/culture/working environment (44%), to pursue a new work challenge (34%) or a lack of career progression (28%)
• The most telling insight of a company’s culture and values comes across at interview stage according to 83%, followed by interactions with current employees (55%), the company’s website (42%), media coverage (42%) and social media channels (32%). 29% are also influenced by Glassdoor reflecting the increasing popularity of these employee review platforms.
• 11% believe values are even more important than pay when it comes to choosing a job and 62% think they’re equally as important
• 86% believe a set of values is of equal or greater importance than holiday allowance when sizing up a job offer
• 67% have rejected a job because of a prospective employer’s set of values
• 73% of companies have a defined set of company values and, of people who work in such companies, 89% of them believe that they understand what those values are - and a similar number (86%) what is expected from them with regards to behaviour around those values
• 71% believe staff demonstrate behaviours which underpin those values – compared to 68% who think leaders demonstrate them
• 26% don’t believe staff support their company’s values and 33% don’t believe their leaders do

The quantitative data for this report is drawn from an online survey of people working in the digital economy carried out in October 2018.

Propel London is a world-class talent solutions business, providing a full suite of services that includes executive search, contingent recruitment, team build and contract appointments. It specialises in commercial, marketing, technical, creative and operations talent.
Founded by Melina Jacaovou in 2000, Propel’s team are people experts, who know their sectors inside out and are trusted to build the global teams of the world’s most successful businesses. Industry agnostic, Propel works with clients on a global level across all industry sectors - from fast growth, VC backed startups to international tech businesses and FTSE 100 brands.