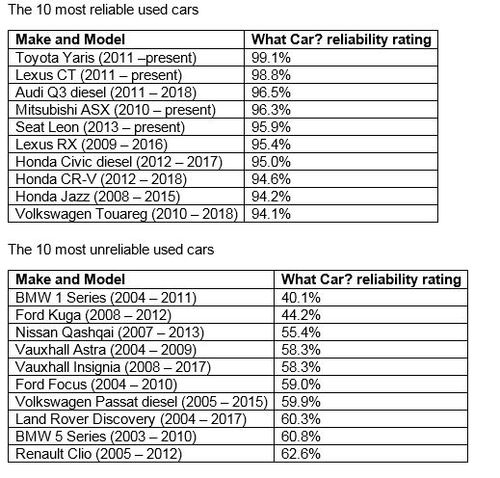 • Toyota Yaris voted as the UK’s most reliable second-hand purchase, with BMW 1 Series the least reliable
• More than 18,000 owners rated their vehicles, aged between four and 10 years
• Japanese models dominate the reliability rankings
• Nearly one in three owners experienced a fault, with suspension issues most common
• To take part in the 2019 What Car? reliability survey, and the chance to win a £250 Amazon voucher, visit: www.whatcar.com/reliability-survey

The UK’s most and least reliable used cars have been revealed, with the Toyota Yaris named as the country’s best second-hand purchase, as part of new research by the UK’s leading consumer champion and new car buying platform, What Car?

More than 18,000 drivers with vehicles aged between four to 10 years old took part in the study, rating how reliable their cars have been over the previous year, the type of problems they’ve encountered as well as whether they were fixed under warranty.

Japanese manufacturers dominate the top 10 table for most reliable vehicles, occupying seven out of the 10 positions. The Toyota Yaris was voted by owners as the UK’s most reliable used purchase, with a 99.1% reliability rating. Only 9% of Yaris owners reported a fault with their vehicle to What Car?, with small electrical niggles most common. The Lexus CT and Audi Q3 came second and third.

At the other end of the reliability spectrum, the previous generation BMW 1 Series was voted as the least reliable motor in the UK, with a score of 40.1%. Nearly two-thirds of 1 Series owners said their vehicle suffered a fault, with battery and engine problems most common – and repairs costing up to £1,500. The Ford Kuga and Nissan Qashqai came second and third.

Across all vehicles, nearly a third of owners told What Car? their car had suffered a fault, with suspension issues most common. However, 22% of owners said the manufacturer picked up the repair bill under warranty.

Steve Huntingford, editor of What Car?, said: “Reliability is often at the forefront of any vehicle purchase. With nearly eight million used vehicles sold last year*, there is huge scope for things to go wrong. By shining a light on the reliability of various makes and models, we hope to help buyers make the right decision when choosing their next used purchase.”

To take part in the 2019 What Car? reliability survey, and the chance to win a £250 Amazon voucher, visit: www.whatcar.com/reliability-survey
ENDS

What Car?, the UK’s leading and most trusted car buying brand, has the magazine, a market-leading website and several established brand extensions. It has helped Britain’s car buyers to make purchasing decisions for more than 40 years and its tests are widely regarded as the most trusted source of new car advice.