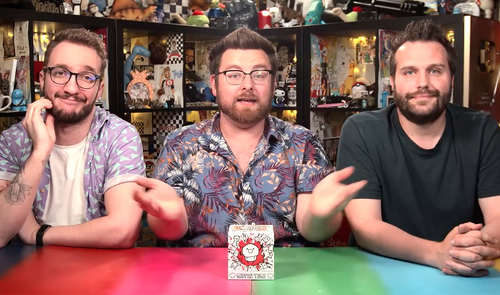 Subheader: The asdfmovie-themed card game is being published by Big Potato Games

Big Potato Games and the guys at Turbo Punch have teamed up to release a brand new party game called Muffin Time on Kickstarter. Last night, they hit the big red ‘LAUNCH’ button and reached their £10k target in just 53 minutes.

Less than 24 hours later, the Kickstarter has reached over £140,000 (a 1400% increase from their original target) and is still climbing.

Muffin Time is the latest creation from Turbo Punch, the creative masterminds behind the ultra-popular asdfmovie series. Thomas Ridgewell, also known as ‘TomSka’, cut the virtual ribbon by releasing a video across all his social platforms, resulting in a massive stampede of backers.

The Kickstarter campaign features four tiered rewards, each one better than the last. The base Muffin Time game can be backed for £15, whilst the top-tier £30 package will reward the backer with the full game, both expansion packs and a massive collection of Kickstarter-exclusive goodies. Backers can expect to receive their games by March 2020 at the latest.

The asdfmovie series is a collection of short animated videos starring anything from skateboarding cows to cute-but-suicidal muffins, and has been viewed over 500 million times. The muffin itself went viral after the Muffin Song was released in 2018, and now it’s making a dramatic return in the new card game.

Big Potato’s Nat Aves was in charge of managing the Kickstarter:
“I was so excited to be involved in the process and the launch was amazing. We all stood around a tiny laptop screen in the Big Potato office and were cheering as we watched the numbers creep up. It’s definitely been worth it – even if I’ve had the Muffin Song stuck in my head for over a year.”

Thomas ‘TomSka’ Ridgewell had this to say about working with Big Potato:

“We played a lot of Big Potato games and had a lot of fun doing it, so we knew they’d be a cool publisher to work with. It’s amazing to hold something in our hands that only existed in our heads a year ago.”

To see what all the fuss is about, or to learn how to play Muffin Time, you can check out the Kickstarter campaign here: https://www.kickstarter.com/projects/bigpotato/muffin- time-the-random-card-game