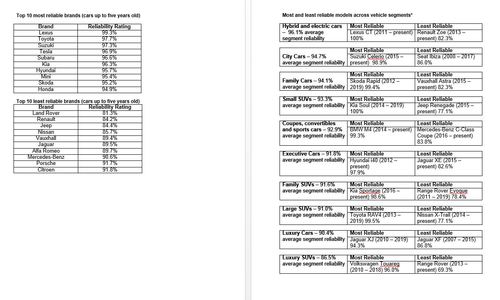 Britain’s most and least reliable new and used cars have been revealed, with hybrid models among the most dependable and Land Rover and Renault owners found to have the least reliable cars.

The 2019 Reliability Survey from Britain’s leading consumer champion and new car buying platform, What Car?, conducted in association with MotorEasy, used reader feedback from more than 18,000 drivers to find the country’s most dependable cars, from brand new models to those up to five years old.

Hybrid cars from Japanese brands topped the reliability charts, with the Lexus CT (2011 – present) and Toyota Yaris Hybrid (2011 – present) receiving a 100% reliability rating from owners, indicating they suffered no faults over the previous 12 months. The only other car to match this achievement was the Kia Soul (2014 – 2019).

Although electric vehicles and hybrids have the best average reliability rating (96.1%) of the 10 car classes in the survey, not all cars with this technology are dependable. The Renault Zoe (2013 – present) scored a lowly 82.3%, with 44% of owners saying their car had suffered a fault.

The worst vehicle class for reliability was Luxury SUVs at 86.5%, with the Range Rover (2013 – present) and Range Rover Velar (2017 – present) proving the least bullet-proof. Almost half of Velar owners (48%) said their car experienced a fault in the past 12 months, while 35% of Range Rover owners had needed to visit a garage, with battery issues most common.

At brand level, Lexus vehicles were found to be most reliable, with a 99.3% reliability rating, followed by Toyota and Suzuki. Japanese and South Korean brands dominated the top 10 brand reliability rankings, occupying seven of the places. The worst brand for reliability was Land Rover, with an 81.3% rating, just below Renault and Jeep.

What Car?’s Reliability Survey asked owners whether their car had gone wrong in the past 12 months, how long repairs took and how much they had to pay to get their vehicle back on the road.

Of the 18,119 cars included in the study, 26% had experienced at least one fault, with the most common problem a non-electrical engine fault. Diesel drivers were more likely to have visited a garage than owners of other types of car, with diesels accounting for 58% of all faults. When it came to paying for repairs, 11% of owners had to fork out between £101 and £200, while three per cent of repairs exceeded £1500.

Steve Huntingford, editor of What Car?, said: “With more than 18,000 motorists telling us about their ownership experiences, the What Car? Reliability Survey gives car buyers one of the most accurate pictures of long-term reliability. With some models suffering a near-50% failure rate, it shows how important it is for buyers do their research when purchasing their next car.”

Whatcar.com is the UK’s leading car buying website, offering trusted reviews and data on every new car. A winner of numerous awards and accolades, whatcar.com is recognised as one of the UK’s leading consumer websites and attracts 1.7m unique users every month and over 13m monthly page impressions. The brand has seen major investment in its digital infrastructure as it develops a new ecommerce platform, allowing users to act on the trusted advice What Car? offers.
With a print circulation of 55,459, combined with its mobile and social reach, What Car? has more than 5.5 million monthly points of contact with its audience on the move, at work, at home and at the crucial point of sale. It is the top performing monthly on the UK newsstand in the motoring category.