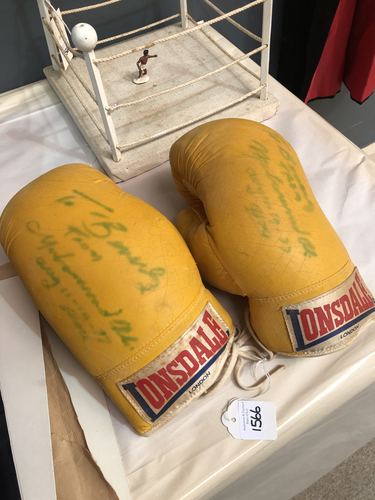 A previously unshared audio cassette recording and never released images of the boxing legend dubbed ‘The Greatest’ are part of a unique collection of items soon to pack a punch at a Newcastle auction.

The Muhammed Ali Collection is valued at 10,000-15,000 pounds stirling and will go under the hammer at Anderson and Garland on 24 October.

All the items in Lot 1566 relate to a visit Ali made to the North East of England in 1977 and belong to a family named Clay, although no relation. Ali changed his name from Cassius Clay in 1964 after converting to Islam.

In the audio, recorded on 12 August, Ali can be heard reciting a brash poem about his forthcoming and now infamous fight with Earnie Shavers. This went to fifteen rounds on 29 September 1977, with Ali finally emerging the winner. The cassette is signed and inscribed to Mrs Clay.

On the recording Ali dedicates the poem to Mrs Clay and introduces it as: “A poem from Muhammed Ali on how this fight will sound over your radio for those of you who can’t get to the telly.”

Later in the audio footage, which is around 22 minutes in length, Ali starts to preach.

“What the world needs is more charitable people… Because after we all die…God is gonna judge us on, not on our colour, our nationality or title.

The Clays were introduced to Muhammed Ali by his official photographer Kenneth Pope of Turners Photography. Pope invited the couple to a charity auction where they successfully bid on photographs that Ali subsequently signed.

This became the start of a long-term friendship that saw the Clays invited to the wedding blessing of Ali and his wife Veronica in South Shields, the European premier of ‘The Greatest’ film and the Ali vs Spinks fight in New Orleans in 1978, when The Louisville Lip lost the title of heavyweight champion of the world in a shock defeat.

Fred Wyrley-Birch, director at Anderson and Garland, said: “Muhammed Ali is recognised as one of the world’s greatest ever sporting icons and his one-liners will go continue to go down in history. This is the man who said: ‘I’m so mean I make medicine sick’ and named himself ‘Lord of the Ring’.

“The collection we are auctioning offers a glimpse into the world of a boxer whose phenomenal sporting career and successful approach to courting media attention resulted in an adoring fan base world-wide, despite the more controversial aspects of his life.

“Lot 1566 is testament to an enduring friendship made during one of his tours and we expect competition to be fierce.”

The wedding invitations, along with a large number of photographs from the day, film and fight tickets are included in the Lot. Also included is a wedding blessing cake topper in the shape of a boxing ring, a pair of signed yellow Lonsdale boxing gloves, inscribed and dated ‘Aug 11 1977’ and a 1976 Olympic 100 dollar Canadian boxed gold coin.

The full collection can be seen online at www.andersonandgarland.com.