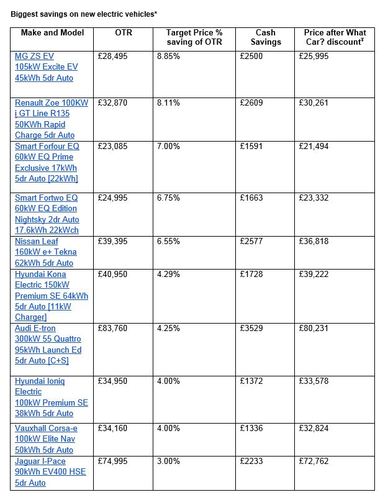 
Some of Britain’s newest and most desirable electric vehicles can be had with nearly 10% savings, as the country gears up towards an electric revolution in the 2020 Budget from HM Treasury.

Exclusive research by Britain’s leading consumer champion and new car buying platform What Car? – which guarantees shoppers on its website at least these savings – found the new Audi E-tron, with a range of up to 277 miles, can be had with a £3529 savings from Audi dealers, while the all-new, third-generation Renault Zoe is already offered with a £2609 discount, or 8.11% saving*.

The price cuts come ahead of the 2020 Budget, announced on 11 March, which is expected to introduce further measures to boost electric vehicle (EV) sales. The Chancellor of the Exchequer, Rishi Sunak, is expected to use the Budget to rubber-stamp proposed changes to Benefit-in-Kind (BIK) rates which will see fully electric vehicles registered after 6 April 2020 pay 0% car tax, rising to just 1% the following year, and 2% the year after**. Current zero emissions company car drivers face a 16% BIK rate.

The Treasury is also expected to continue to offer the Plug-in Car Grant for new electric vehicle buyers. The current incentive, worth up to £3500, for first time EV owners is scheduled to end in April. The move would support the Government’s recent announcement to bring forward the sales ban of all new petrol, diesel and hybrid models from 2040 to 2035.

Shoppers using What Car?’s new car buying platform will save on average 2.92% or £896 when buying a new fully electric vehicle***. According to Target Price analysis, some of the newest EVs on sale can be had with nearly 10% discounts, including the third-generation Renault Zoe (8.11% saving) and the all-new MG ZS EV (8.85% saving)*.

To help new owners charge their vehicles, the Treasury is likely to confirm the Department for Transport’s announcement of a £10 million investment towards residential on-street charging points****, which could see as many as 3600 new charging outlets introduced in towns and cities across the UK – making it easier for those without a driveway to charge.

Steve Huntingford, editor of What Car?, said: “March often sees the highest registration numbers for the year, so it’s apt the Government is likely to use the 2020 Budget to continue to solidify its position in backing electric vehicles through both company car tax and financial incentives. Our latest, March Target Price data shows some of the latest and most desirable EVs can be had with nearly 10% savings, making the decision to go electric even more appealing to the hundreds of thousands of new car buyers looking to purchase a vehicle this month.”

To find your next car, visit: www.whatcar.com/new-car-deals

Target Price is unique to What Car? and set using intelligence gathered by a team of mystery shoppers, who negotiate daily to find the best new car deals available across the UK. The published deals are then guaranteed – and often beaten – by retailers selling cars through whatcar.com.

Target Price is based on a cash deal and does not include elements like finance incentives or trade-in considerations. What Car? has also introduced Target PCP finance deals, which show what buyers should expect to pay per month for their new car.