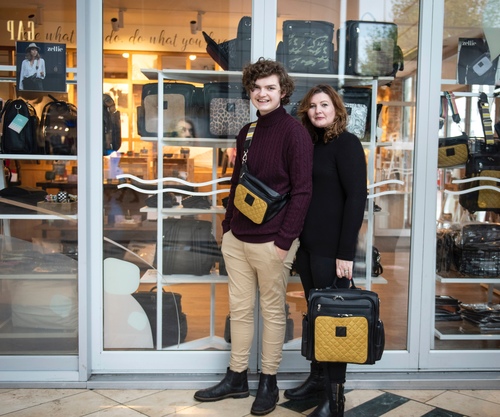 Rebecca puts their success down to the youthful optimism of her son Henry, who came up the Zellie-Zipper’s novel design.

A new British brand chose to launch its innovative work and leisure bags in the midst of a pandemic - and sales are booming despite the fact that for most people, travel is firmly off the agenda.

The Zellie-Zipper range is the brainchild of mother and son design team Rebecca and 16-year old Henry Patterson. Ranging from a bum bag to a carry-all, the range features interchangeable patches that zip on and off, allowing owners to change the look of their bags rather than the whole bag.

Rebecca and Henry designed the bags to appeal equally to people’s desire to stay organised, to personalise their look and to be kind to the environment – all the bags in the range are made of a vegan-friendly leather-alternative fabric.
The pair were understandably nervous about the timing of the launch in September with no end to the pandemic in sight and every prospect of further lockdowns.

But since the launch, sales of the bags have rocketed, boosted by favourable interest from social media influencers and celebrities.

Rebecca puts their success down to the youthful optimism of her son Henry, who came up the Zellie-Zipper’s novel design.

“I was ready to delay the launch, but Henry thought we should go ahead, arguing that we should see the situation as an opportunity. The pandemic has been a leveller in all sorts of ways and a lot of smaller businesses have shown agility that established players sometimes lack,” she adds.

Serial entrepreneur Henry says, “Sadly some retail businesses will fail, but there will be some good news for the smaller companies that spring up to fill the gaps in the market.”

Zellie is supporting local initiatives to keep retail alive during the pandemic. It is part of the Indie Collective, in which small businesses have come together to open a pop-up shop in prime retail space in Milton Keynes.

“Online shopping is great, but it has its limitations. I still believe that people, including my generation, love shopping in real shops. I think we’ll see even more of that in future,” he says.

For similar reasons he thinks the pandemic will increase the appetite for travel. “People are buying our bags because they know this situation won’t last for ever. When they’re free to travel again, they’re going to make the most of it. Whether they’re going out for the evening or heading off on holiday, we want to make sure that they are wearing or carrying a Zellie bag.”

ABOUT ZELLIE
Zellie bags are designed to be a best friend for every day and every adventure.

Zellie is founded on the principle that Life is too short to rummage, because everything you need to take with you should be just where you want it and easy to find first time. A Zellie bag is light-weight and hard-working with lots of clever and adaptable sections to keep you organised.

Every Zellie bag comes with a smart black Zellie-Zipper™ Signature Quilt patch that can be zipped on and off to instantly change the look of the bag. With a wide range of colours and designs to choose from, plus co-ordinating accessories and straps, it’s easy to start a Zellie-Zipper™ patch collection and create a new-look bag every day.

We think fast-fashion is not sustainable, so as well as designing Zellie-Zipper™ to change the look without changing the bag, Zellie bags are built to last using vegan-friendly leather and quality zips and hardware. Orders are dispatched twice a week rather than daily to reduce the carbon footprint of the bags.

Zellie is founded by mother and son team Rebecca and Henry Patterson. They are both experienced entrepreneurs in their own right, which may seem unremarkable until you learn that Henry is still only 16 years old.

ABOUT HENRY:
Henry took to conventional schooling like a duck to flower arranging. Teachers gave up on him and peers bullied him. He developed a stammer so bad that sometimes he struggled to complete a sentence.

But Henry had a head full of ideas, and at the age of ten he wrote his first book, a children’s story called The Adventures of Sherb & Pip. The book was a big hit worldwide and was developed into a children’s brand, Not Before Tea, which is still growing today.

Henry left school to be home educated, and part of that education involved travelling the world to talk about his book and his unconventional approach to overcoming challenges. Interestingly, he didn’t stammer when he was on stage in front of thousands of people (go figure?) and as his confidence grew, he became increasingly in demand as a motivational speaker.

At fourteen Henry wrote his second book, Young & Mighty, to help other young people find their entrepreneurial spark. Ever resourceful, Henry managed to get contributions from many high-profile self-starters including Sir Richard Branson and Instagram co-founder, Mike Krieger.

So here we are today. In the last five years Henry has travelled around the US, Asia and Europe and all that travelling got him thinking… The result is Zellie: a range of great looking bags with heaps of clever features. The first complete collection of bags featuring the unique Zellie-Zipper™ Patches launched in September 2020, and just like Henry, it’s full of surprises!