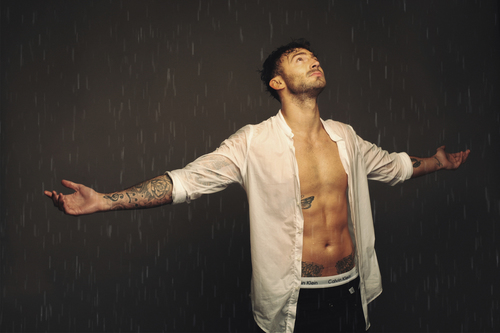 I can’t wait to start working with MOT Models. It’s a completely new challenge that I’m keen to get stuck in to and see where it takes me!

Jake Quickenden, aged 27, The X Factor finalist and runner up on I’m A Celebrity… Get Me Out Of Here!, has been signed to Europe’s top modelling agency, London-based MOT Models.

Jake’s talents are seemingly endless, with his music career soaring. He also regularly presents on ITV’s This Morning, works with a number of charities and is now signed as a model under the agency’s Mainboard Men’s Division. In addition, he features in MOT Models’ new Social Media Influencers department.

Hailing from Scunthorpe, Lincolnshire, Jake first entered The X Factor in 2012 with the encouragement and support from his family. Despite reaching the Judges Houses stage on Nicole Scherzinger’s team, he missed out on a spot at the live shows. But this was not the end of The X Factor journey. Re-entering the show in 2014, Jake seized the opportunity with both hands and made it through to the Live Shows.

After a shock early exit from the show, Jake was snapped up as a contestant on I’m A Celebrity… Get Me Out Of Here! and jetted out to Australia in November 2014 to face the challenges of the jungle!

Jake’s down to earth and charming personality won over the nation and he was crowned Prince of the Jungle, and runner up to Carl (Foggy) Fogarty, who is the father to his now girlfriend, Danielle.

Jake said, “I can’t wait to start working with MOT Models. It’s a completely new challenge that I’m keen to get stuck in to and see where it takes me!”

Alison Griffin, a director at MOT Models said, “We’re really excited to sign Jake Quickenden. Jake has a wise head on his shoulders and is certainly no stranger to a challenge! He has a very strong fan base and appeals to a young at heart audience, which means he will be in high demand for all sorts of high profile campaigns.”

Jake has just released his new single ‘Blindfold’ along with his new six track EP ‘New Chapter’ which will be released on Friday 1 April 2016. Jake is also embarking on his second live tour throughout September and October 2016, with multiple dates at venues all across the UK.

Growing up listening to Johnny Cash and The Beatles, Jake’s musical talents began from an early age when he also learnt how to play the guitar.

As well as his modelling and musical talents, Jake is also a keen sportsman having played football for the youth team at Scunthorpe United and the Sunshine George Cross Football Team in Melbourne, Australia for two years.

Jake also gives much of his time contributing to good causes and has proudly supported various cancer research charities over the years. This summer, he will be an ambassador for Teenage Cancer Trust’s ‘Shunburn’ campaign, following in the footsteps of Nicholas Hoult.

MOT Models, which was founded in 1985, prides itself on its strong, positive, nurturing relationships with both models and advertising clients. They typically serve the commercial market, namely high profile campaigns for brands including Axe (Lynx), Body Shop, Esprit, Galaxy, Samsung, Seksy and Vertu.

Jake Faces a Bushtucker Trial on I’m A Celebrity… Get Me Out Of Here! In 2014 https://www.youtube.com/watch?v=deHzgS9eePk

MOT Models is a leading London model agency which provides excellent models to top photographers, advertisers, designers and production companies. MOT models can be recognised in many advertising and commercial campaigns worldwide.

One of the oldest established agencies in the UK, MOT Models is constantly at the forefront of the modelling industry, bringing about innovation and setting the highest ethical standards.

MOT is a broad-based agency with models of all ages, ethnicities and types. One thing all MOT models share is quality of work and commitment to making sure that the assignment is successful, whether it is for a worldwide campaign or a brochure for a small company.

Whilst many agencies are now trying to imitate the MOT approach, none can match the combination of model and service offered by MOT.

MOT has an enviable reputation for developing new talent. Many of its leading models have been with it through their education and into full-time careers as models. The agency provides nurturing, considerate and thoughtful management, which leads to a good and lengthy career.

The agency was sold in 2006 to a large Dutch company and bought back into private ownership in 2009. The four directors and shareholders all work operationally and have over 70 years' combined experience in the agency. It is this level of experience that ensures that MOT Models maintains high and consistent levels - an agency that clients and models can trust.