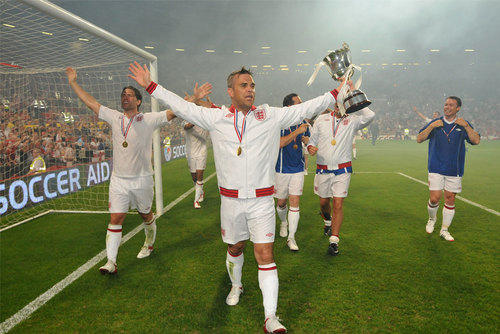 London, 5th June 2016 – Wembley based outsourcer Confero are aiming to take £120,000 for UNICEF’s Soccer Aid 2016 by donating 60 call centre agents, who will be answering calls for the Telethon at their state-of-the-art call centre in Wembley.

Confero are proud to be an official corporate partner of the hugely successful celebrity event that has raised over £17 million for UNICEF's invaluable work, helping children across the globe.

Confero is one of the UK’s leading providers of inbound and outbound outsourced call centre services and are excited to be involved for the fourth consecutive time since 2010. It is always a rewarding and fun evening, opening up the contact centre to volunteers including staff, suppliers, family and friends.

CEO David Freedman is “thrilled and honoured to be part of such an iconic event” alongside corporate heavyweights BT, ITV, Lex Autolease and E.ON.

Confero call centres will donate 60 experienced agents, a comprehensive hardware and software infrastructure and full pre-and post-event consultancy and will be a vital component in helping Soccer Aid raise much-needed money for UNICEF.

“Following our successes in 2010, 2012 & 2014, we are very much looking forward to being part of the Soccer Aid Telethon again and we are proud to be working with a charity that is committed to helping others” said David Freedman. He continues “Confero’s agents aim to take £120,000 in donations for UNICEF’s worthwhile causes.”

Giuseppe Iantosca, Confero’s new Head of Charity sector at Confero, is delighted to be able to offer the contact centre’s facilities to raise funds for UNICEF and is looking to lead the way by manning the phone lines all night alongside his team of volunteers.

About Confero (www.confero.co.uk) – Confero is a class-leading outsourced call centre provider with a blue-chip clientele based in the shadow of the Wembley Stadium arch. Working with clients in both the commercial and charity sector, they provide Inbound call centre services including customer services, e-tailer website support, credit card order lines, helplines, product recalls and crisis management. Outbound call centre services include telemarketing, lead generation, database cleansing and appointment setting, provided to both SME’s and some of the world’s largest corporations including Audi, KPMG and ITV.

Soccer Aid aims to raise money for UNICEF’s crucial work to help provide children with nutritious food, vaccines and clean water, as well as protecting them from violence, exploitation and abuse. Throughout the match coverage, viewers will see short films by UNICEF Ambassadors detailing how the money raised will benefit children around the world.