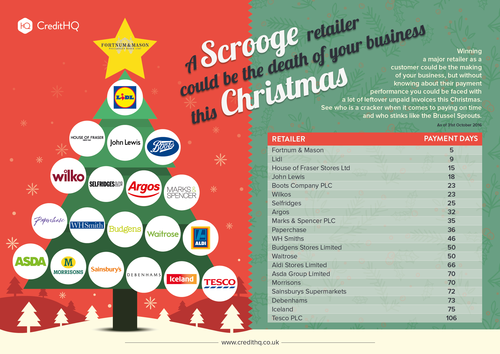 just because a retailer is a household name, it’s no guarantee they are going to pay on time

The data analysis by fintech startup Ormsby Street, also revealed that the average time taken to pay a supplier amongst the list of 20 retailers was 45 days beyond terms. With previous Ormsby Street research revealing that the average overdue invoice to a small business was worth £6,142, small business suppliers to some UK retailers could be waiting prohibitively long to receive payment on a considerable amount of money.

“Whether it’s a small greetings card designer or a food manufacturer of some sort, winning a contract to supply a national retailer can be a landmark moment for a small business, particularly in the lucrative Christmas shopping season,” said Martin Campbell, MD, Ormsby Street. “But just because a retailer is a household name, it’s no guarantee they are going to pay on time, as our analysis clearly shows. If an invoice had 60 day terms, a small business would be waiting on average more than 100 days for payment – that’s clearly unacceptable – and even the best performer amongst these retailers is still not paying on terms.”

“Also, because Christmas is such a major part of the shopping calendar, any orders may be much larger than at other times of the year. This means that a small business could be waiting for even more money during the festive period. If they have had to take on extra staff or resources to meet the order to a major retailer, this could be a potentially difficult and damaging time for their cash-flow.”

“Negotiating with a major retailer on things like payment upfront can be tough – retailers are all aware that for a small business it’s a big deal to get their products in front of a national audience and so they usually hold the trump card,” continued Martin Campbell. “But that’s not to say that small businesses should just accept the situation. If the retailer values the product and wants it in their store, there should always be a little leeway for negotiating better payment terms.”

Ormsby Street is the company behind small business credit-checking tool, CreditHQ, a free online tool that allows a small business to check the credit status, payment performance and general financial health of any customer or partner. It takes credit data from Companies House and major credit data suppliers and presents the analysis via a simple traffic light ratings system. The traffic lights show clearly the level of risk associated with the company in question, with users given two different ratings, one addressing credit risk and the other payment performance.

The analysis showed that amongst 20 of the UK’s leading retailers, seven of those took on average more than 60 days beyond terms to pay their suppliers, a period of time that is hard to justify.

“For a small manufacturer or supplier, winning a national retail contract can feel a little like Christmas has come early,” concluded Martin Campbell. “Yet if it means they have to wait more than two months to receive payment, it is a big decision as to how any shortfall in cash-flow can be bridged, if indeed it can. The answer lies in small businesses protecting themselves against late payment by learning more about the financial health of their customers, negotiating more favourable payment terms and then chasing hard for payment when it is overdue.”

About the analysis
The analysis was conducted in October 2016, focusing on 20 leading UK retailers (full list available on request) and is correct up to and including 31 October 2016. The data analysed comes from Experian, who base this on historical payment data across a variety of sources.

CreditHQ is built by Ormsby Street, a Software-as-a-Service business based in Old Street, London. Formed in 2014 to take over the operation of the financial data proposition of BCSG, Ormsby Street is developing the next generation of financial data services for small businesses. Its team of high-performing product innovators and software engineers are quietly taking sophisticated financial information and turning it into a next-generation digital tool to help businesses make good decisions about customers, suppliers and themselves.