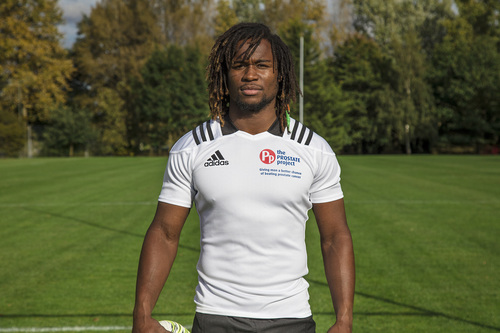 1 in 4 black African/Caribbean men will get prostate cancer compared to 1 in 8 white men.

The Prostate Project, a Guildford based prostate cancer charity, is proud to announce that England and Harlequins rugby international, Marland Yarde, has joined the charity as an Ambassador to spearhead a parliamentary lobby to reduce the age at which black African/Caribbean men can legally request a PSA test from 50 to 45 years.

1 in 4 black African/Caribbean men will get prostate cancer compared to 1 in 8 white men.

Marland will also promote the charity’s ‘Race to the Line’ Appeal to complete the building of a world-class Urology Centre at Royal Surrey County Hospital in Guildford. The charity already has GBP 1.75m in the bank and needs to raise a further GBP 250,000 to reach their GBP 2m target – almost half the build cost.

Quote from Anne Milton
"Every man has a legal right to a PSA test at age 50 but Black/African Caribbean men have an increased risk of contracting the disease at an earlier age. We need to do everything we can to raise awareness amongst black African/ Caribbean men of their risk, and make sure they get the screening services they need”
The Rt Hon. Anne Milton MP

The new urology centre will transform the patient experience for men, women and children.
Professor Stephen Langley, Clinical Director of Urology at Royal Surrey, said: “Our status as a centre of excellence in the diagnosis and treatment of prostate cancer will be further enhanced by this exceptional new facility. It is already attracting high calibre personnel who want to be part of the pioneering team at Guildford.”

Another major benefit will be a permanent research presence in the new centre. Established and jointly funded by the Prostate Project, Professor Hardev Pandha’s internationally recognized cancer research team are based at the University of Surrey but will now have much easier access to Royal Surrey patients which will facilitate and accelerate vital trials and other sampling work. As one of only a few specialist urology units in the UK, it will become an important NHS referral centre for the whole country.

The Prostate Project is a volunteer led charity with no offices or paid staff. Admin costs are less than 4% resulting in at least 96% of raised funds going directly to the point of need. The charity has raised more than £8m over the last 18 years More information is available at: www.prostate-project.org.uk

Hon. President, Tim Sharp said: “We are most grateful to England RFU, Adidas and Harlequins for supporting Marland’s Ambassadorial role for us. We are very hopeful that his involvement will increase awareness of the serious threat posed by prostate cancer to the black community and convince many black men to get themselves checked and to donate to this wonderful new centre.”

THE UNCOMFORTABLE TRUTH ABOUT BLACK AFRICAN/CARIBBEAN MEN AND PROSTATE CANCER

Reason is unknown but may be linked to inherited genes

Know your risk - if you are black and over 45, talk to your GP

Over 40,000 men are diagnosed with prostate cancer every year in the UK and 11,000 men die from the disease