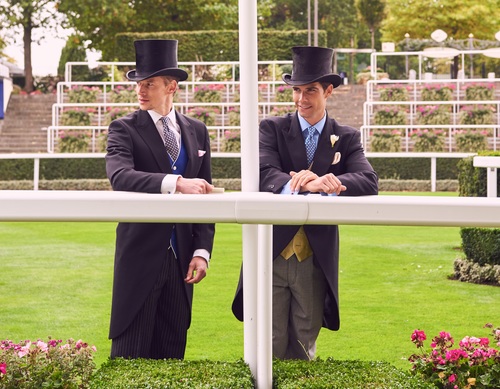 - Record sales with takings up 25% from last year

Oliver Brown is proud of its racing connections and believes this to be a contributing factor to the recent boost in sales. As an Official Licensee to Royal Ascot, Kristian Ferner Robson has created a capsule Royal Ascot collection of accessories on sale in-store, online and within the Ascot Shops. Oliver Brown will be present within the Royal Enclosure and Queen Anne Enclosure for all five days of Royal Ascot. Not to mention featuring within the Cedar Tree and Parade Ring Shops for the remainder of the Flat season. You can find Oliver Brown top hats and morningwear within the Official Royal Ascot Style Guide. Boasting the largest independent collection of top hats in the country, Oliver Brown provide exclusive ‘top shelf’ antique pieces – a must-have in order to gain access to the Royal Enclosure.

Proprietor Kristian Ferner Robson says of the sales boom; “In recent years we have become known as the racing tailor and the destination for formal morningwear and top hats for clients in the UK as well as overseas. We have a very loyal client base, many of whom are actively involved in racing, including a number of top flight trainers, jockeys, owners, and gentlemen from the racing media. We have been privileged to enjoy an association with Royal Ascot for many years having been the only retailer invited to sell top hats at the racecourse. However earlier last year we were announced as an Official Licensee to Royal Ascot, which has further strengthened our affiliation with the racing world and played a vital role in the increase in sales we have experienced over the last quarter.”

For further details on these figures and the elements associated, please call Rachel on +44 (0) 1452 346466 or email rachel@bloxhampr.com

Oliver Brown is the home to classic British menswear and the country’s oldest independent top hat specialist. Oliver Brown’s flagship store in the heart of Chelsea, London is the ultimate destination for quintessentially British ready-to-wear morning and eveningwear, shooting and country clothing, luxury accessories, and formalwear hire. Oliver Brown’s tailoring services brings together thirty-five years of experience as a gentleman’s outfitter, with the skills of their in-house tailor, to provide British made bespoke, semi-bespoke and made to order.